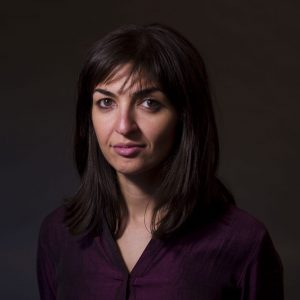 Gelareh Kiazand is a producer and director of photography (DP) based in both Tehran and Toronto. Born in Iran, 1981, she graduated from Sheridan College in Toronto in 2003. She has lived and worked across the Middle-East, including Dubai, Kabul, Istanbul, and Tehran. After graduating, she began her film career as a still photographer for renowned directors such as Sinai, Framanra, Hatamikia, and Kiarostami. Photos from these shoots were chosen to be exhibited at various galleries, MOMA Tehran, and the Arles Photo Festival.

After moving to Kabul in 2013, she began producing and filming hard to access stories for VICE. This leads her to produce and film in Kabul, as the 2nd unit for Hollywood features such as WHISKY TANGO FOXTROT (Glenn Ficarra, John Requa), ROCK THE KASBAH (Barry Levinson), and WAR MACHINE (David Michod).

In 2016, she was the DP for an Iranian cinematic film, which earned her the first female DP title for a cinematic film in post-revolution Iran. She’s also worked as the director of photography for two other feature narrative films made in Germany, China, and other feature docs for PBS, Arte, and CH4. Other feature film projects include TEACHING WITH THE NOMADS (Louis Meunier) and co-shooting for CHASING ASYLUM (Eva Orner) and DESERT ONE (Barbara Kopple). You can watch her TEDxTehran talk online, where she speaks of these human stories in various countries. www.gelarehkiazand.com